What Baseball Scouts Are Looking For - A Parents' Perspective 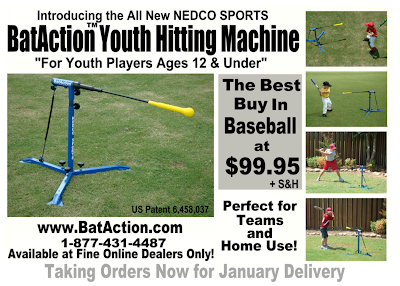 Trying to understand baseball scouting can be confusing and frustrating for hopeful baseball players, parents and coaches. Why some players are considered "prospects" and get drafted whereas other players who appear to be more successful are not given the time of day, creates the confusion and frustration.

Before going into detail on what baseball scouts are looking for when scouting, there are some questions players and parents should answer as to whether a player is a possible draft choice.

1. Is the position player far and away the best athlete on the team? If a player is not the best athlete on a high school or college team, chances are they do not have major league potential. The only exception is a hitter who has unbelievable power.

2. Does the player or pitcher dominate at his level or have the "wow" factor? This player may or may not have overwhelming statistics but they definitely possess the "wow" factor. A player who displays a skill where everyone watching says "wow" is what I am talking about. Chances are if the player does not over-match or show the wow factor at the pre-professional level, they are not good enough to merit a professional opportunity.

3. Even if a player dominates, is the competition level advanced enough to determine that a player may have pro potential? It is important to watch how a player does when facing the top players on the opposing teams. Many players can dominate against average competition but not against the top competition.

4. Does the player appear to have a love of playing baseball? Many apparently dominant players are never drafted because they do not have a passion for the game. Without an intense passion for the game, scouts know that players will never withstand the rigors of a 162 game season.

It is important to understand a couple of common baseball terms that baseball scouts use. The first one is projectable. Baseball scouts are in the business of projecting where a baseball player will be in a few years. They look at players' physical attributes and try to determine if they can realistically play major league baseball. The second term that is necessary to understand is tools. In baseball, scouts rate players tools - running, throwing, fielding, hitting and hitting with power for position players. Pitchers tools are rated on a different scale - arm speed, arm action, arm strength, off speed pitches and control.

Players must possess "plus tools" by the time they reach draft age in order for scouts to consider them for the major league draft. Observing scouts must feel like a drafted player can develop and refine their advanced tools to major league caliber skills. Rarely will a player develop professional tools if they are not evident by the time a player reaches draft age, 18 to 21 years old. Therefore, if a player cannot run, throw or hit close to major league skill levels by these ages, they will not be drafted into professional baseball.

What are those levels for position players?

1. Players must be able to throw the ball at least 85 miles an hour.

2. They must be able to run the 40-yard dash well under 5 seconds, with catchers given a slight exception.

3. They must be able to get the ball to jump off their bat producing groundballs that get through infield holes and line drives that can get to and through the gaps in the outfield, if not out of the park.

4. They must have good hands where they can develop the ability to catch balls hit at major league speeds.

1. Must be able to throw the ball 90 mile an hours or higher. Pitchers who throw in the high eighties must have great ball movement, control and off-speed pitches.

2. Must display an easy-throwing arm action and demonstrate a respectable amount of control.

Most drafted players have exceptional tools in one or two of the areas and are average in the others tools. Potential star players have the ability to be well above average in all the tools. Baseball scouts are most interested in players' raw skills and not necessarily as concerned with a player's statistics. Scouts ask themselves, "With the proper training, do I see this player playing in the major leagues in a few years?" If they can answer yes to this question, the player is put on the scouting list to be further watched for the intangibles of attitude, heart, character and work ethic.

Former major league baseball player, Jack Perconte gives baseball hitting tips and batting practice advice for ballplayers of all ages. His baseball playing lessons, books and advice can be found at http://www.baseballhittinglessons.com/baseball. Jack is the author of two books, The Making of a Hitter and Raising an Athlete - his positive parenting advice and books can be found at http://positiveparentinginsports.com.

Thinking About Baseball Training
By Jeffery A Wise

Recently I've been interested about what players and coaches do and think about during the off season. I've talked to many people and found that one thing on their minds is baseball training.

Players especially want to improve during the off season so they can be well equipped and play better when the spring season arrives. For most high schools that season begins in February.

There are several ways for players to improve during the off season, including playing fall ball, participating in winter baseball camps and participating in baseball training. Indoor batting cages and facilities will allow you to practice as often as you want.

It's a good idea for all high school players to train in the off season. Some players ages 12-14 may also benefit from training as it will help them take their skills to the next level.

Don't let cold weather keep you from training. There are indoor facilities all over North America and many schools now allow student athletes to practice in the gym during certain times. If all else fails, bundle up and hit the ball fields. That's what we did in Washington State when I was growing up. It only takes a few minutes of running around to get used to cold temperatures.

When training, consider a baseball specific workout, conditioning and nutrition program. These will help you get stronger as the years go by and keep your body in shape to last through the rigorous season. Avoid unhealthy, fattening foods. Do your body good and eat right. This will go a long way with your baseball training.

You can also participate in baseball training by locating materials that you can read and watch. Remember, baseball is largely a mental sport. The more information you know, the more likely it will translate physically during games.

Jeffery A Wise invites you to learn more about baseball training so that you can become a better hitter and help your team win. Start learning today at our site through articles, blog posts and videos and start hitting the baseball with confidence.

Also:
Check out our network of baseball blogs:

Attention Coaches, Players and Parents; If you own or use a batting cage, this post is for you.

Attention Coaches, Players and Parents; If you own or use a batting cage, this post is for you. The new Batting Cage Door is a must for anyone that owns or uses a batting cage. 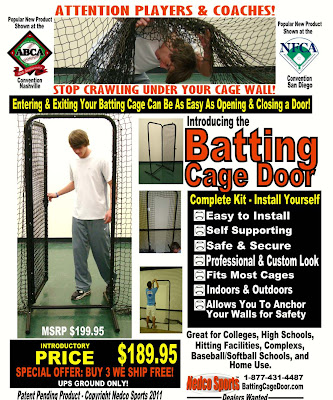 Baseball2u.com sells the new Batting Cage Door Kit
Posted by Coach's Profile: at 11:16 AM No comments: 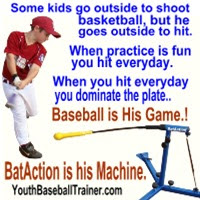 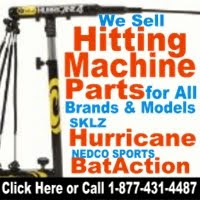 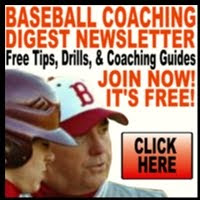 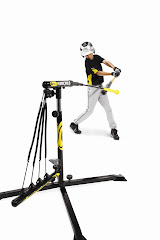 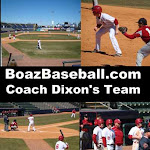